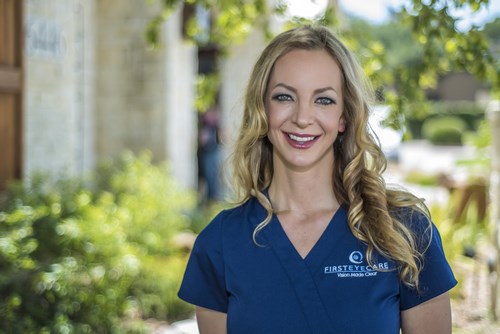 Dr. Nicole Davis graduated from Northeastern State University Oklahoma College of Optometry in 2007. She was an award-winning student with a long list of achievements. In 2007 alone, she received eight honors, including Beta Sigma Kappa Silver Medal, the NSU Academic Achievement Award for Outstanding 4th-year student, and the Triad Excellence in Ocular Pathology.

Dr. Davis’s interest in optometry began while she was in high school. She was employed at Complete Eye Care in Lawton, Oklahoma until she left to attend The University of Oklahoma, where she earned a Bachelor’s Degree in Business Administration. While in optometry school, Dr. Davis completed a Clinical Externship at Eye Care Associates of South Tulsa. Her focus was on primary care, pre and post-surgical care, and acute care. Dr. Davis then practiced in Tulsa, Oklahoma at New Vision Eye and Laser Center until 2011, when her family relocated to Dallas, Texas.

Dr. Davis is licensed by both the Texas Optometry Board and the National Board of Examiners in Optometry. She specializes in the visual correction of irregular corneas with contact lenses including the use of scleral, piggybacks, and synergies lenses.

Dr. Davis and her husband, Dr. Teran Davis, currently live in Dallas, Texas, with their two children. She enjoys running, traveling, and spending time with her family, along with the occasional OU Football game.